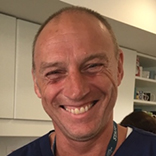 I am currently an Associate Professor in the Division of Children’s Nursing at London South Bank University. I began my paediatric nursing career in 1987 in Manchester and have since worked in neurosurgery, theatres, neonates, intensive care, and accident and emergency. I currently work at LSBU where I teach a wide range of topics including, child development and neuroscience nursing to both pre and post-registration nurses.

While working as a ward manager at King's College Hospital (KCH) I completed a retrospective study to evaluate the treatment of children with hydrocephalus. I moved into full-time research for two years, investigating acute brain injury with the neurosurgical team at KCH. I was also the Trauma Audit Coordinator at KCH and played a role in the development of the Trust becoming a London trauma centre. I have published in numerous journals and I’m a member of the editorial board for the British Journal of Neuroscience (BJNN).

Registered with Nursing and Midwifery Council (NMC): adult and paediatric nurse and teacher.

-A member of the editorial board of British Journal of Neuroscience Nursing.