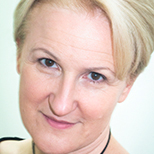 I joined LSBU in 2017, where I am the MA Editing and Post Production Course Director and BA in Film and TV Practice Editing Pathway Leader.

I originally graduated in Fine Art and Critical Theory with a BA from Goldsmiths College, then completed a PgDip in Independent Film Production at the University of Cardiff and in 2019 a MSc in Social and Cultural Anthropology at UCL.

I started my career in film production, as production assistant and assistant director, later focusing on editing drama and documentaries. Running my own company, l produced, directed and edited film projects for several clients.

Coming from an art and experimental film background, I also trained in scriptwriting and performance, completing several courses at the Script Factory and a year-long Meisner technique acting training in 2015 with Scott Williams, at the Impulse Company.

In my work I have always been interested in exploring and pushing format boundaries. While at art school I transformed my drawings and paintings into sculptural pieces. While my video work, though displayed through tv screens, was situated over highly reflective surfaces so as to be reflected and replicated outside of the boundaries of the screen.

With my latest project, I aim to explore the crossing of boundaries between art, drama and documentary formats.

For this I am using video projection mapping to create a multiscreen piece. The work draws from auto-ethnographic research around recurrent themes of women’s experience of patriarchal oppression and it will be accompanied by research on the nature of the kinetic experience of making artworks and thinking through the body.

Over the years my artworks and films have been exhibited in the UK and abroad, as part of film festivals and art exhibitions. These have included: Alpe Adria Cinema in Italy, Hamburg Film Festival, Bergen International Festival and Randomize UK and Taiwan touring art exhibition.

I am currently a British Film Editors association member and volunteer governor and Co-Vice Chair. Responsible for the organisation of the BFE mentoring scheme.

Supervising and guiding students on the editing of dramas and documentaries production through to completion and delivery.

Advising and assisting on editing workflows and preparation of material for sound mixing, grading

Participated to the validation process for QAA membership and subsequent reviews.

Member of several committees including: Teaching and Learning, Staff Development, Board of

Graduate Studies. For the last two years, I was elected Staff Governor by my colleagues and in that role, I was a member of the Board of Governors and the Finance and General Purpose Committee.

Consolidated the training plans for graduating students, and expanded the department contacts with industry professionals.

I was also in charge of staff recruitment within the department.

Design and delivery of 2-day and 5-day theory and practice editing workshops.

Over a 2 year period and arranged by London Film School

Design and delivery of a 5-day theory and practice editing workshop.

Design and delivery of a 5-day theory and practice editing workshop.

Overseeing the day to day running of the facilities, including training and organising annual equipment maintenance.

Responsible for the £100,000 development of the workshop, for which I created appropriate

administrative infrastructure for the management of 2 members of staff as well as resources and student training schedules.

Through the company I offered the following services:

Development of courses in Video Production and Editing.

External Examiner for the MSc Film and Television

Master with Pathways in: Sound, Cinematography and Scriptwriting.

I am a member of the governing board since 2020 and was appointed as co-Vice Chair in 2021. Since 2020 I have been responsible for setting up the association's mentoring scheme.

I was awarded funding towards the cost of production to create online learning resources for the Visual Arts Department Video Research Lab at Goldsmiths.